Home All About Pianos History of the Piano

History of the Piano

The story of the piano begins in Padua, Italy in 1709, in the shop of a harpsichord maker named Bartolomeo di Francesco Cristofori (1655-1731). Many other stringed and keyboard instruments preceded the piano and led to the development of the instrument as we know it today.

Mankind’s knowledge that a taut, vibrating string can produce sound goes back to prehistoric times. In the ancient world, strings were attached and stretched over bows, gourds, and boxes to amplify the sound; they were fastened by ties, pegs and pins; and they were plucked, bowed or struck to produce sounds.

Eventually, a family of stringed instruments with a keyboard evolved in Europe in the 14th century. The earliest of these was a dulcimer, a closed, shallow box over which stretched wires were struck with two wooden hammers. The dulcimer led to the development of the clavichord, which also appeared in the 14th century. These were followed by the spinet, virginal, clavecin, gravicembalo, and finally, the harpsichord in the 15th century.

The harpsichord, however, was limited to one, unvarying volume. Its softness and loudness could not be varied while playing. Therefore, performing artists could not convey the same degree of musical expression as that of most other instruments. The artistic desire for more controlled expression led directly to the invention of the piano, on which the artist could alter the loudness and tone with the force of one’s fingers.

The harpsichord was a particularly important development leading to the invention of the piano. Its ability to project sound more loudly than its predecessors, and refinements in the action (or touch) inspired many more musicians to compose for the keyboard and thus, to perform keyboard works.

First exhibited in Florence in 1709, Cristofori’s new instrument was named gravicembalo col piano e forte (roughly “soft and loud keyboard instrument”). Eventually, it was shortened to fortepiano or pianoforte, and finally just piano. His earliest surviving instrument dates from 1720 and is on display at the Metropolitan Museum of Art in New York City.

Despite many improvements during the past 300 years, it is truly astonishing to observe how similar Cristofori’s instruments are to the modern piano of today.

We are living in perhaps the most exciting time in history to buy, own or play that eternal instrument, the piano. Whether your goal is to purchase something as small as software that can record what you play, a newly designed player piano, a digital instrument or a classic acoustic model, there have never been as many choices for the consumer.

Also called “reproducing pianos,” this class of instrument represents a modern update on the paper-roll player pianos you remember from old movies, and they’ve grown enormously in popularity over the last decade.

These are not digital instruments – they’re real, acoustic pianos with hammers and strings that can be played normally – but they can also “play themselves” using sophisticated electronic technology. Instead of punched paper, they take their cues from floppy disks, specially formatted CDs or internal memory systems. Several manufacturers offer vast libraries of pre-recorded titles for their systems—music in every genre from pop to the classics—recorded by some of the world’s top pianists. These sophisticated systems capture every nuance of the original performances and play them back with startling accuracy—providing something that’s actually much better than CD fidelity, because the performances are live.

Thanks to these new systems, many people who don’t play the piano are enjoying live piano music any time of the night or day. Whether they’re accompanying dinners for two or entertaining a houseful of partygoers, these high tech pianos take center stage. For people who do play the piano, these systems can be used to record their own piano performances, interface with computers, aid in music education, assist with composing and many other applications. In short, these modern marvels are not your grandfathers’ player pianos! 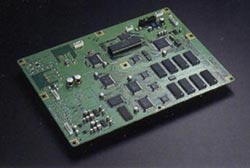 To the uninitiated, digital pianos may appear related to the inexpensive toy keyboards than can be purchased over the counter at electronics stores. But that’s like comparing a go-kart with a fancy touring sedan. The digital pianos produced by many of today’s top piano companies produce sophisticated, sampled piano sounds taken from their own top models. What’s more, they offer other instrument voices – sometimes by the hundreds – with striking realism.

Because digital pianos are software-driven, they also open up exciting new ways for beginners to make music. For example, some keyboards feature lights over the keys to help you play a favorite tune, or learning programs that combine the music with an on-screen display.

Digital pianos help home musicians get more out of the Internet as well, and they can be connected not only to a computer, but to other instruments for arranging and orchestration. With memory storage setups such as Flash ROM, users can download and store new music.

There are also a number of digital pianos that offer a variety of unique functions—such as providing you with a lot of different preset and combo sounds, ones that can give you a layering effect to your playing. Some of these instruments also include a Karaoke/Video output for the next time you want to put a little life in your party.

There is probably no more exciting area of growth in the piano industry than that of software technology. Science fiction writers of the past would be impressed by today’s advancements – like software that converts music files to sheet music… downloads and unzips music files and Karaoke files from the Internet… or even lets musicians print entire musical scores and analyze their harmonies and chord names. Today’s software will even let users shop for, purchase and print sheet music over the Internet, if you can’t find the score in a store.

Kurt Vonnegut, who wrote “Player Piano” in the 50s, would not believe the new software that currently exists for these instruments. For example, there is now software for the piano that will allow it to load hours of pre-recorded music, with no discs or CDs to change; everything from jazz to the classics. Should you be looking for music by a specific pianist, you will be able to find it: everyone from Floyd Cramer to Peter Nero is represented, and can keep your piano (or your get-together) humming.

But software is not just for the player piano. For the budding composer, there is also new technology galore. For instance, the first ensemble piano that features CD-R technology is now available. This piano has the capability of CD-R – meaning you can put a disc in this piano, record a CD of a song you have written or played, and, immediately play the disc back in your boom box or PC. And not just keyboard sounds; vocals, too, can be ‘burned,’ enabling any budding songwriter to produce a 16 track studio-quality ‘demo.’

Synthesizers are still very popular among jazz and rock musicians. Among the newest is a synth that offers multiple oscillator technologies and has real-time control over pitch, time and format. There are also synthesizers that give players the ability to control audio with the same flexibility as any music file, all due to new technology. This new software can take on all sorts of new musical and recording functions.

And what of traditional concert pianos? Have they been lost in the technological shuffle? Far from it. With countless artists from Bruce Hornsby to Michael Feinstein using them, the acoustic piano is still very much in demand.

While the basic design of the acoustic piano is remarkably simila to the first models from around 1700, manufacturers are including innovations at a rapid pace. Some of the updates draw on materials science, to find special woods or newly available materials that make a piano more durable and tonally stable. Some use engineering know-how to strengthen the piano and keep its sound deep and rich for years. And 300 years of experience with the mechanics of a piano’s action has resulted in keyboards that feel great and stay in tune better.

Concert grands are used by numerous conductors, composers and songwriters—and are more available and affordable than ever. And although concert grands are the choice of performers, there are many high quality baby grands that are designed to meet the needs of the home owners and players of all levels.

Whether you are looking for a compact instrument or a larger one renowned for its lower register and power – whether you want a piano than can keep up with the loudest orchestra, one that re-creates a classic style from the past, or an instrument made of a particular kind of wood – you should have no trouble finding the traditional piano that suits your needs.

It’s very clear in 2004, that whether you want to play, record, mix, have a player piano entertain you, or sit down and practice Brahms or Bach, there probably has never been a period in which the piano has been available in so many different and useful forms. Whatever your musical needs, there is a piano (and perhaps software) out there waiting for you.

Watch this timeline of the history of the piano (approx. 30 minutes):