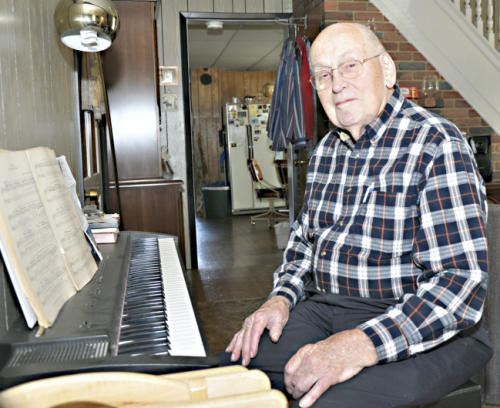 Ira Shenk’s life has been filled with music.

At the age of 86, he plays piano at morning Mass at St. Paul the Apostle Church in Annville, PA.

“My fingers still work,” he said.

When Shenk was a youngster growing up in Fontana, he began taking piano lessons at the urging of his parents. The music teacher came to his family’s house.

“I had to practice a half hour a day. I didn’t have a choice about that ,” the Annville Township man said, adding that he had to learn to play classical music. “I didn’t much care about that.”

Shenk said he wanted to learned to play the popular music of the day.

“My parents didn’t appreciate that too much,” he said.

When he was about 7, Shenk began taking lessons from music teacher John Ulrich of Lebanon. It was a change more to his liking. Ulrich skipped the classical and taught him how to play popular music like “Stardust.”

After graduating from Hershey High School in 1944, Shenk enlisted in the Navy Reserves the following year. As World War II was winding down, he became an aviation cadet and learned how to fly in a biplane. He completed enough training to fly solo. Click here to read more.

Piano virtuoso from Kazakhstan invited to Britain's Got Talent

We all want to stay sharp-witted as we age, which explains the recent proliferation of brain games and puzzles. But newly...
Copyright 2014 Venus Premium Magazine Theme All Right Reserved.
Back to top